Western astrology is used to interpret the influence of the movement ofthe planets, celestial bodies and astrological points according to where they are located using the tropical zodiac. The most well known use of Western astrology is the interpretation and creation of astrolgical birth charts for individuals, which are otherwise known as natal charts. Each astrological chart has 12 sections where the signs are located and another 12 sections for the 12 astrological houses. Astrological interpretations can also be created for events past, present and future.

Most people are familiar with the Sun sign columns in newspapers and magazines but are not familiar with Moon, Mercury, Venus, Mars, Jupiter, Saturn, Uranus, Neptune and Pluto signs. There are also angles, houses, aspects and other astrological bodies in an astrological chart.

Astrology is based on the movement of the celestial bodies (planets, etc) that can indicate the characteristics an individual has, how future trends can develop and how past events developed.

The information given in an astrology chart and reading can provide useful information which you can use if you wish to. It is not intended as a list of rules on how you should live and what choices you should make.

I see astrology as a tool that functions as a combination of a map and a clock, that can show where and when the best choices can be made and difficulties avoided. You don't have to believe in astrology to use it, astrology is not a religion. Astrology can describe how the influence of the celestial bodies can be used and experienced. In my opinion astrology can be used to forecast possibilities and opportunities, but not specific events; there are just too many potential events for anyone to be able to forecast all of them. Although astrology can't tell you when you will win the lottery or when you will find a partner, it can be used to show when you have the best chances of success that can be used to your advantage. A predetermined fate can't be revealed by astrology; everyone makes decisions according to their own free will.

Where twins are concerned, a short amount of time can make a difference in the birth chart of one twin compared to the birth chart for the other twin. The same applies to multiple births such as triplets or quadruplets. Even conjoined twins can have slightly different personalities. 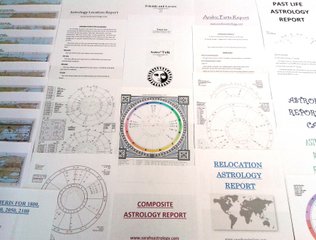 At it's earliest stage it's suspected the human race has paid attention to the movement of the Sun, Moon and stars. The way nature responded to day and night was observed. As humans evolved they noticed the seasonal changes according to the shortest and longest days (now known as Solstices); also when day and night were of equal length (now known as Equinoxes). The occurances of eclipses and blood red Moons were associated with conflict and poor harvests.

Across the world myths were created about gods and malefic beings that were associated with the stars, constellations and other celestial bodies that were thought to influence people and event on Earth. Observations were made that the Sun, Moon and planets appeared to travel across a band of constellations which were later to become the zodiac. Some constellations were only seen at certain times of the year. Over time the zodiac was divided into 12 sections; the same number of sections that are used today. The development of the 12 sections of the zodiac is due to the Sun spending about 30 days of the year in each section. The zodiac was sub-divided by 360 to give 360 degrees; the Sun appears to travel at about 1 degree a day.

At about 3000 BC the Sumerian civilization thought the Earth was surrounded by water with the celestial bodies floating around it. Humankind was believed to be ruled by the gods according to the movement of celestial bodies. Pythagoras thought the planets made music (music of the spheres); Plato associated the Sun and Moon with the sexes; Hippocrates thought that no doctor was qualified unless they could interpret a patient's horoscope. In the Ptolemaic world view at about 2 AD the Earth was thought to be surrounded by water, fire and air. Above this was the sphere of the Moon, which circled below the spheres of the Sun and planets. there was also the sphere of the stars and the sphere of the 'Prime Mover'; then heaven which was the home of the gods.

Hipparchus discovered when the zodiac was divided into 12 sections of 30 degrees that some of the stars had moved at about 2 degrees in 150 years in relation to the first degree of Aries. This discovery let to the realization there are in effect two zodiacs; one orientated towards the Sun (tropical) and the other to the constellations (siderial).

The zodiac (from the Greek for 'circle of animals') had evolved into 12 symbols to represent the influence the Sun had on the Earth. The connection between when an individual was born and their character was observed and recognised. Twelve basic types of character were noted according to where the Sun was in the zodiac: which are now called Sun signs. With a more detailed observation it was noticed that different people born on the same day didn't have identical traits. It was thought that the Moon and planets also had an influence on the traits than an individual would have.

The moment of birth, when the first breath was taken, was decided as the correct time for the birth chart to be created for an individual. It was the moment when the child was physically separated from the mother and became an individual.

The celestial sphere was developed that included meridians, the equator, the tropics of Cancer and Capricorn. Celestial longitude and latitude enabled the measurement of the movement of celestial bodies as viewed from Earth. The influences of planets in signs were observed where the influence of the planets were at their strongest and where they were at their weakest. For example: Saturn was considered to be at its strongest in Capricorn and weakest in Cancer.

Further observation led to the creation of four categories of planetary influence in the signs: exaltation, detriment, rulership and fall. Planetary influence was also interpreted according to the distance the planets were from each other. The measurement of the distances were created according to the number that divided the 360 degree circle of the zodiac; these were referred to as aspects. If the 360 circle was divided by two the measurement 180 degrees was created, which is the aspect the opposition. Divided by four is 90 degrees and the aspect square; divided by three is 120 degrees and the aspect is the trine; divided by six is 60 degrees and the aspect is the sextile. The opposition and the square were considered to be inauspicious, the trine and sextile were considered to be auspicious. this interpretation was based on the distance of signs of the zodiac and how they interacted with each other; which was the method also used to interpret how planets interact with each other in aspect.

The planets were thought to have greater strength the closer they were to the meridian; the height of the planets above the horizon were considered when they were interpreted. This led to the creation of quadrants where the horoscope was divided into quarters based on the horizon and meridian lines. It was also recognised that planets on the eastern horizon had a strong influence; the eastern horizon was to be called the ascendant.

When the Roman empire was in decline and Christianity gained popularity the priesthood at that time did not approve of astrology. this is about where Arabic astrologers made a substantial contribution to astrology that is used today. They improved Greek star maps and made additions to the astrological knowledge that was available at the time. Some of the names used for the fixed stars are Arabic in origin; also so are the terms nadir and zenith. One of the most important contributions was the creation of mundane houses where the sky was divided into twelve sections; six above the horizon and six below the horizon. Each house had an effect according to the celestial bodies and sign located in it. Further observation revealed the characteristics of the houses had an association with the zodiac signs; the 1st house with Aries, 4th house with Cancer, 7th house with Libra and 10th house with Capricorn. (Aries is associated with spring, Cancer with midsummer, Libra with autumn and Capricorn with midwinter.) The 1st house is concerned with appearance; the 2nd house with possessions; 3rd house with communication; 4th house security and domestic matters; 5th house entertainment; 6th house health and work; 7th house partnerships; 8th house sex and death; 9th house religion and philosophy; 10th house achievement; 11th house friendship and social interaction; 12th house privace and hidden matters. The use of the houses explains how people born on the same day can have major differences according to their time and place of birth.